I do not habitually wind-up Owls.

But late last night, I succumbed to a black and sinful temptation.

I often walk George at dusk, taking him out for a final chance to “commune with nature” before we all go to bed.

The light has been failing noticeably earlier: creatures of the night now find themselves sharing the forest paths with us, and this has largely been met with their disapproval.

I have never known darkness like it. Walking from our house to the white gates is like wading through treacle. The Rhododendrons menace the path, blocking out the sky’s faint bluish afterlight. Without a torch, it is physically impossible to see – to the extent where George is liable to run into me if I turn it off.

There is something quite exhilarating in this. The earthy smell of rank vegetation seems more complex and enticing. You can almost pick out the different layers and textures of the undergrowth by their scent.

With a breeze, tall conifers sway hypnotically, making eerie murmurs like distant whales in the forest.

It is not uncommon to feel a kiss of air on your cheek as bats flicker minutely through the darkness. Their stuttering echolocation patters lightly over your skin – more like a touch than a sound. They have no fear of man, and will dive lustily into a torch beam as insects are drawn to the light.

Those of you who follow Glengorm on Facebook will know that I recently rescued a Pipistrelle Bat from a puddle. This tiny creature was face down and hopelessly tangled in spider webs when I lifted it out. I thought it was already dead, but the warmth of my hands brought it round.

Bats are a protected species: unless it is an emergency [such as this instance, where it obviously would have died if left unassisted] you need a special licence to handle them. It is also worth noting that a very small number of British bats – Daubenton’s in particular – have been found carrying a virus similar to rabies. People who work professionally with bats are required to have a vaccination against the disease, and gloves should always be worn regardless.

The Bat Helpline is: 0845 1300228 – If you find a stricken animal, it is best to seek professional advice and let somebody know what you are doing.

Fortunately for this one, I used to work for a consultant bat ecologist  in Edinburgh [though I do not hold my own licence]. The bat was warmed and dried gently on a half filled, covered hot water bottle. That done, it was offered dog food from the end of an artists paintbrush. It was ravenously hungry, and snapped like a bulldog after the brush when I took it away to re-load. It showed absolutely no fear.

Once it felt a little stronger, it removed the spider webs that had been wrapped around its body. Its ears were stuck flat to its head with the strands of silk, and each pinged back up as the delicate claws brushed it away. It yawned, stretched and groomed contentedly. Following each feed, it stuffed itself back between the folds of its towel and the hot water bottle, until just its head and the tip of its wings were visible.

After a couple of hours [and an unsolicited guest appearance in front of Masterchef – they are fabulous at escaping] I took it back outside and popped it under a roof tile close to where I found it.

Pipistrelles are on average only around 4cm in body length, and weigh about 5.5 grams. Their wingspan is larger at about 20cm. I think it is absolutely incredible that a creature this size has been known to live to 16-years of age! Glengorm has an active maternity roost in the slate tiles above the Coffee Shop. If you listen closely, you can hear the bats chattering throughout the daytime.

I was musing over the bat rescue as I walked along the top road. Deep in thought, I first dismissed the faint tremulous bleating as that of a sheep. It was only as it started to move closer that I realised it was the call of a Tawny Owl.

Grinning like a school girl, I raised my cupped hands and blew.

A weak “phuuurrrrrrting” noise was the only result. Clearly, I had lost my touch. George stopped and looked at me with the air of one who has much to put up with.

Not deterred, I raised my hands again and blew with all the force I could muster.

A hoot of mighty proportions blasted out into the night, reverberating between the tree trunks like a sonic boom.

The forest sunk into shocked silence.

[It’s worth pointing out here that, given the time of day, I was in fact wearing my pijamas, dressing gown and wellies. One of my more “eccentric” looks.]

Only the male Tawny Owl produces this eerie sound. Females have a sharper “ke-week” call, and this forms the first part of the infamous “Tu-whit Tu-woo” duet.

Delighted, I hooted again. How any bird could have been fooled by this I shall never know. I waited eagerly for my reply.

A brilliant photo of an owl in Lincolnshire. Picture Credit: Joe Pell

In 1870, a Mr Charles Waterton found that 94% of male Tawny Owls reacted territorially within 30minutes of hearing a human hoot. The study was carried out in rural Cambridgeshire, so I can only imagine what kind of a reputation this man got for his trouble.

Owls do seem to attract intriguing characters, and another example that springs to mind is the Rev. Henry White – brother to the universally celebrated Selbourne Naturalist, Gilbert White.

There is a charming poem by Douglas Stewart, detailing the discovery by Henry that Tawny Owls hoot exclusively in the key of B-Flat. If you’re interested in that sort of thing, I will include it at the end of this post for your enjoyment. The thought of this gentleman stalking around the village of Fyfield at night with a set of pan pipes makes me feel slightly more secure about my own nocturnal wanderings…

I could see the slight black shape shifting between the upper branches of the larch trees. Its hooting became both more frequent and more pointed. Striking the occasional bum note, I responded in kind.

What the poor bird must have been thinking I can scarcely suppose: an enormous asthmatic-dyslexic owl was at large in his territory, and he felt compelled to run it down.

George, unable to amuse himself as effectively as his master, slumped miserably on the moss.

He becomes bored as soon as I stop walking, and no matter where we are, begins the irritating process of huffing, puffing and throwing himself around in protest.

Tawny Owls could never be accused of being fussy eaters. Prey items ranging from medium sized birds such as Mallard ducks [they are only about the size of a pigeon themselves, so this is impressive!] through to small mammals [including bats], reptiles, invertebrates and – most bizarrely- fish have been recorded.

They are pugnacious and highly territorial. Often, they will out muscle competing species and displace them – particularly in urban areas. They have been known to kill both Little Owls and Long-eared Owls during such interactions.

Further, they are extremely aggressive in defense of their young, and will relentlessly attack anything that approaches the nest cavity [so, if you were planning sneaking a look – don’t even think about it!] A very sweet looking juvenile Tawny Owl. Many young birds die after being ejected from the parental territory; finding a territory of their own brings them into conflict with adults, and learning to hunt must be tough. Picture Credit: Bart Blom

If anyone remembers the photographer Erik Hosking, he lost an eye to a Tawny Owl quite early in his rise to fame. Ironically, this accident served to boost his career rather than impact negatively on it. Licensed bird ringers follow specific safety protocols when working with Tawnies, including hard hats and visors for protection. 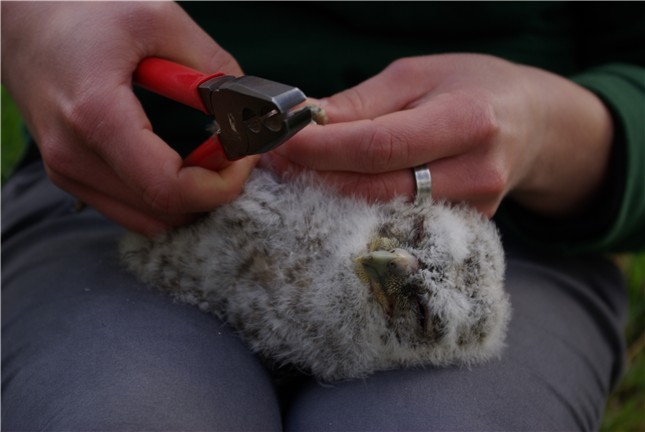 This chick is being ringed by Richard Barns of the BTO, with the Gibside National Trust conservation team. The pliers are used to fit an open or “split” metal ring to the bird’s leg. The circular slots in the pliers close the edges of this ring together around the leg, without risking injury by crushing. The ring is completely circular when fitted this way [not tear-drop shaped, as it would be if pinched together]. This helps to prevent it rubbing, and allows the ring free movement around the limb. Picture Credit: Phil Younger

As we exited the forest, the castle loomed ahead of us. The dark lends it a completely different character, and lit windows burn like eyes out of the night. A young stag grazed watchfully on the lawn – he has been hanging around for a few weeks, and is sometimes seen during the day. The rut begins soon, so the lush grass will do him good.

Behind us, the owl was still calling stridently in the forest. I gave a few halfhearted hoots to let it know that we were moving away.

Upon arriving home, I enthusiastically told Alex about the owl. Cupping my hands together, I blew with both vigour and pride.

There was noise like a mouse breaking wind, and a fair quantity of spit.

Sing softly, Muse, the Reverend Henry White
Who floats through time as lightly as a feather
Yet left one solitary gleam of light
Because he was the Selbourne naturalists’s brother

And found that each one sang, or rather hooted,
Precisely in the measure of B-Flat
And that is all that history has noted;
We know no more of Henry White but that.

So, softly, Muse in harmony and conformity
Pipe up for him and all such gentle souls
Thus in the world’s enormousness, enormity,
So interested in music and in owls;

For though we cannot claim his crumb of knowledge
Was worth much more than virtually nil
Nor hail him for vast enterprise or courage,
Yet in my mind I see him walking still

With eager ear beneath his clerical hat
Through Fyfield village sleeping dark and blind,
Oh surely as he piped his soft B-Flat
The most harmless, the most innocent of mankind.